With its VDD 400.2 deep drilling rig, Deggendorf-based MAX STREICHER GmbH & Co. KG provides a drilling rig for offshore use featuring a fully modular structure. The special feature of this rig is that its structure is made up of individual modules, with a weight limit of 12 tons per module. The advantage of this is that the entire rig can be assembled and disassembled in a quick and cost-effective manner under offshore conditions using the crane technology available on the respective drilling platform, this means expensive Floating cranes are not required. To enable this quick connection and disconnection of modules a Plug and Play concept was adopted, which mean Modules in need of repair can be quickly replaced where necessary. The connectors used are manufactured by Hawke International , a member of the Hubbell Inc. group of companies based in Manchester England. Hawke is the industry leader for connection solutions in the Ex field and played an important role in the successful implementation of MAX STREICHER's modularity concept. HAWKE connectors from the InstrumEx and ControlEx series are used in the VDD 400.2 deep drilling rig. 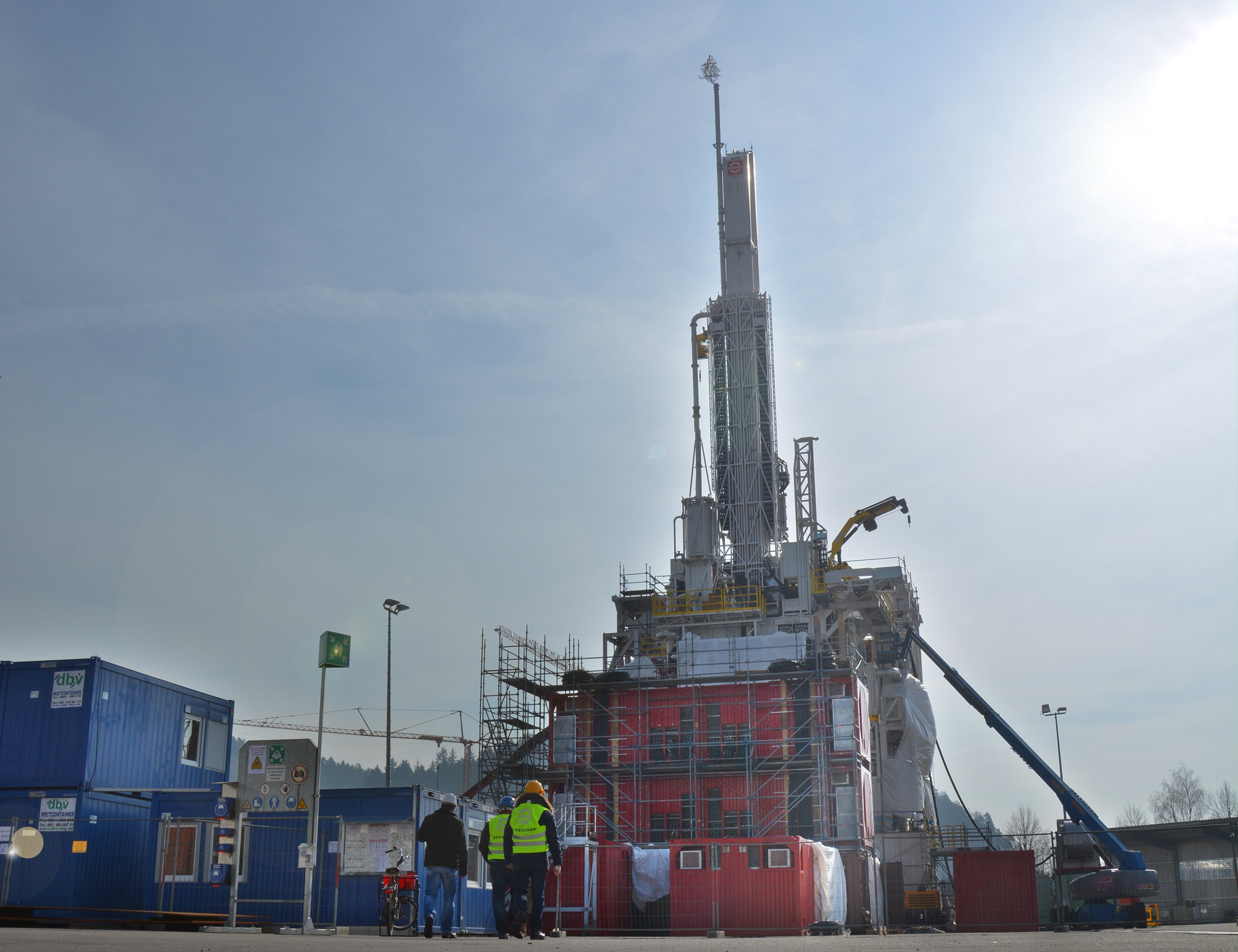 "The North Sea oil and gas industry is increasingly confronted with ageing platforms and exhausted reservoirs. In this area, there is a relatively large number of platforms and drilling locations that will soon be reaching the end of their service life or are already at this stage," says Tobias Löprich, who is responsible for technical documen-tation and risk assessments at MAX STREICHER. In some cases, the yields in the oil and gas fields are no longer cost-effective. In short, many drill holes need to be de-commissioned and sealed in accordance with the local statutory provisions – this is also referred to as 'plug and abandonment'. The problem is that the jack-up rigs used in the North Sea rarely feature the equip-ment that would enable the work-over of the drill holes to be performed in an eco-nomic or technically correct manner. Tobias Löprich explains: "This may be down to gas or oil installations being positioned incorrectly on the sea bed, meaning that it is impossible to make any progress using the standard jack-up platforms." There are two potential solutions. 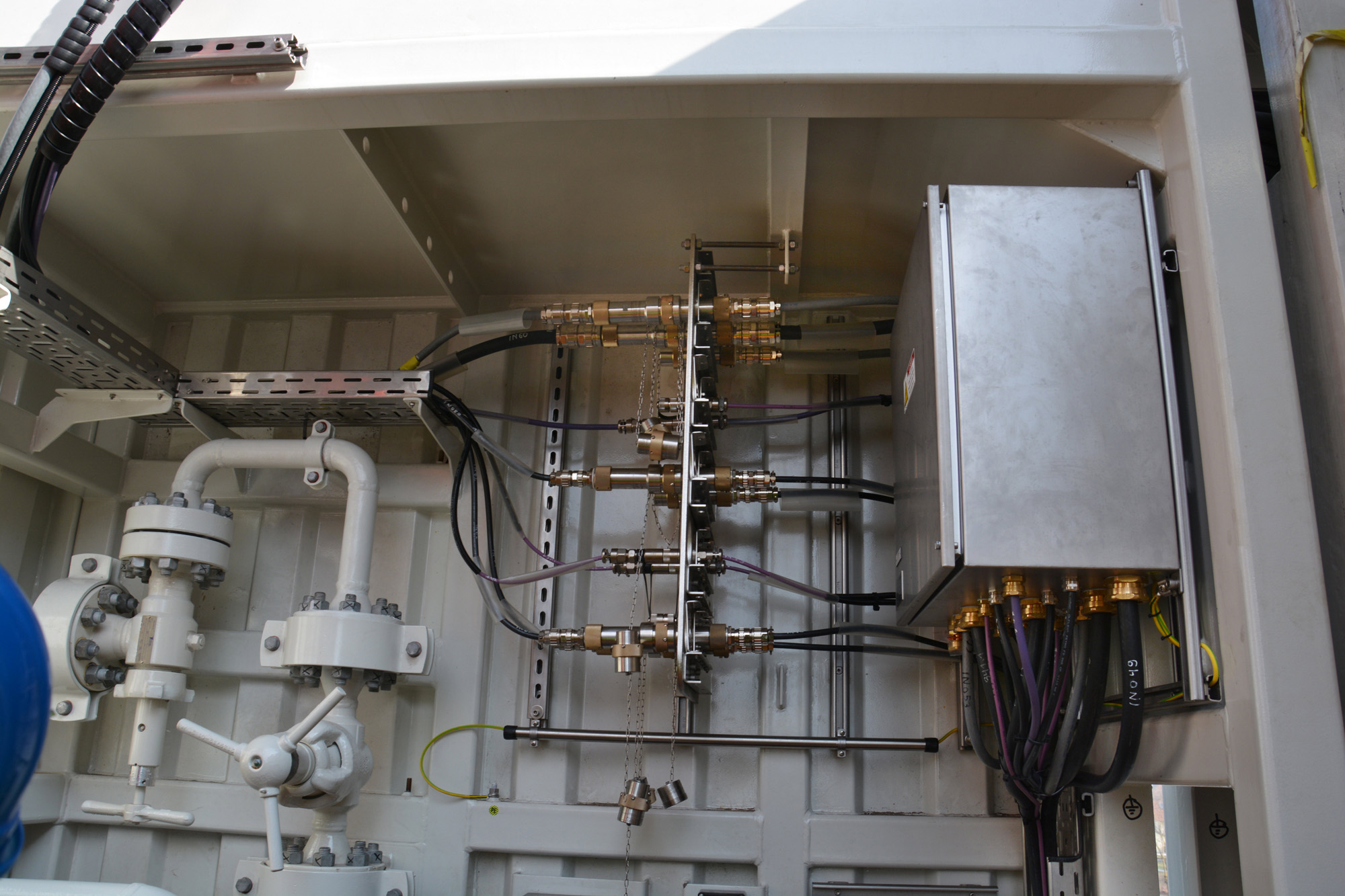 A solution with a future:

a piggy-back on the offshore platform.

On the one hand, you can upgrade the ageing platform, but this option is extremely expensive due to the very high offshore labour costs. This is because the Norwegian occupational safety directives state that a worker is entitled to claim four weeks of holiday after two weeks of offshore work, meaning that three individuals are needed to fill the role of a single offshore worker. As higher hourly wages are also paid for offshore work, the costs for an offshore labour hour are 5-6 times higher than on-shore.

In addition, the technical implementation often requires considerably more effort than on land due to the offshore situation and weather conditions. MAX STREICHER GmbH & Co. KG has introduced the alternative in the form of its VDD 400.2 deep drilling rig. The concept is that, instead of performing a technical upgrade on an older rig, the VDD 400.2 is positioned on the old platform as a piggy-back. The VDD 400.2 must therefore be suitable for use on a whole range of offshore platforms. Once the work is done – that is, once the 'plug and abandonment' process is complete – the VDD 400.2 can be relocated to the next platform. However, the VDD 400.2 can also be used for new drilling locations.

The Norwegian company ARCHER commissioned STREICHER to develop and construct one such modular offshore drilling rig. In the process, the VDD 400.2 was designed, built and accepted in accordance with the Norwegian safety standards (NORSOK), which are the strictest in the world. Following completion, certification and admis-sion into operation, the platform will be dismantled down to the individual modules and then reassembled on site in Norway. The VDD 400.2 will then enter service on the Heimdal gas platform of the Norwegian energy company STATOIL.

The gas production in the Heimdal gas field has fallen considerably in recent years. Today, the Heimdal platform primarily acts as a central junction in the North Sea for the processing and distribution of gas. The platform is supplied with gas from the Huldra, Oseberg, Skirne and Vale fields and routes it to the Norwegian mainland via the Vesterled Statpipe. At peak levels of gas extraction, the Heimdal platform is re-sponsible for around 15-20% of all Norwegian gas production. 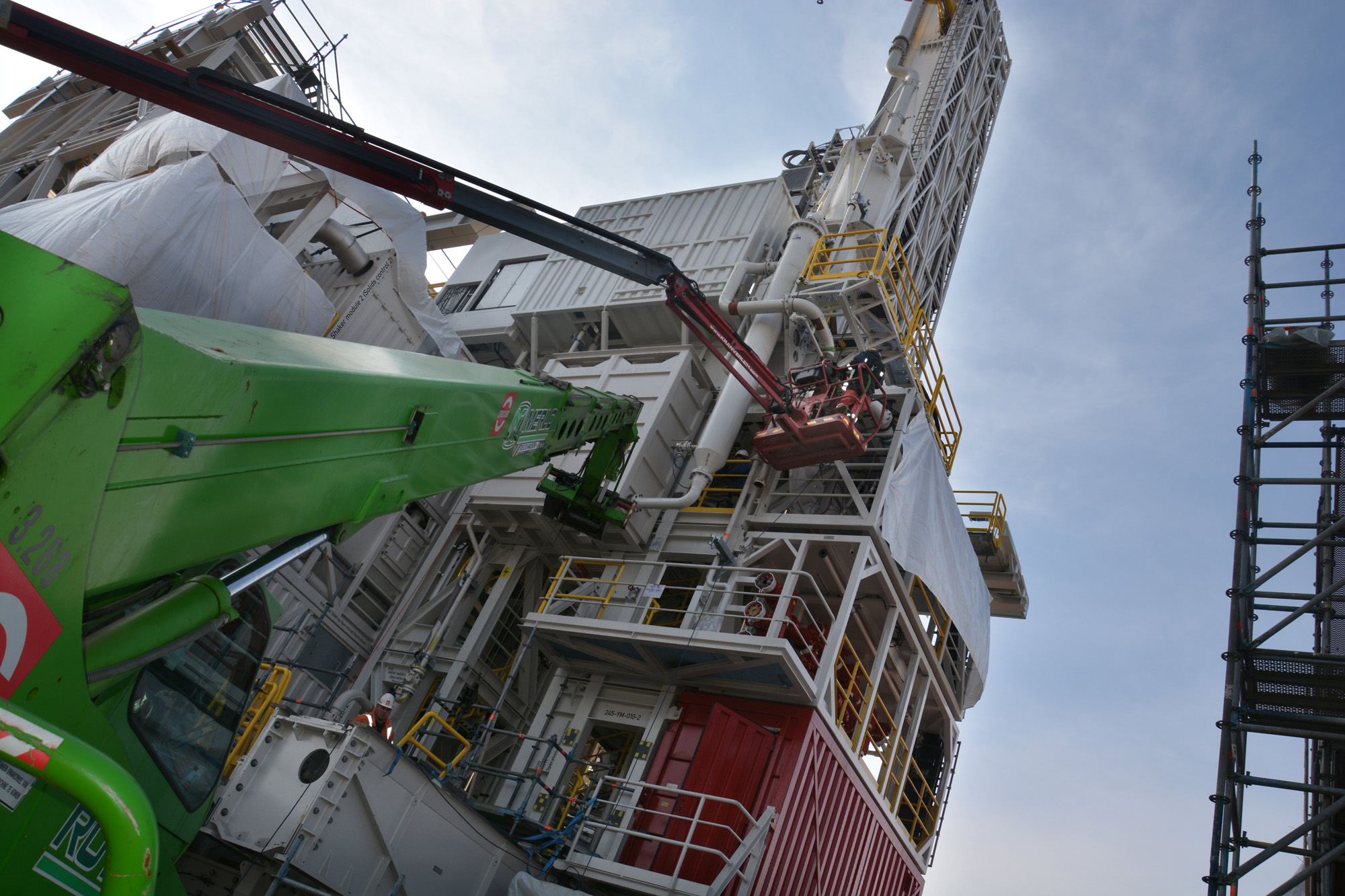 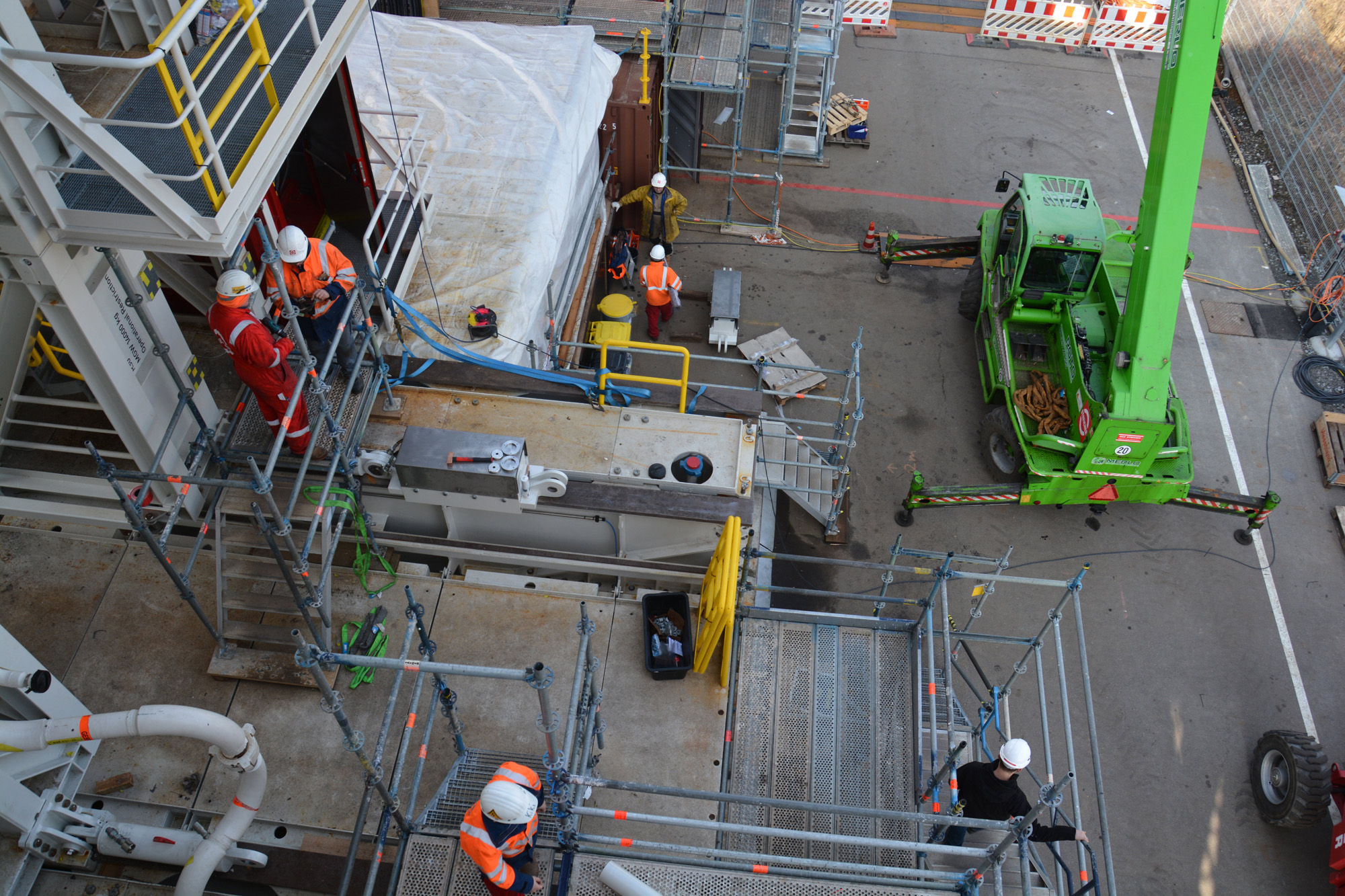 The VDD 400.2 modular offshore drilling rig from MAX STREICHER consists of over 100 individual modules, has an unladen weight of around 1,300 tons and operates with a drill string weighing a maximum of 400 tons. The maximum depth, which is the correct mining term for referring to the length of the drilling hole, comes to around 7,000 metres. On the VDD 400.2, the handling of the thread strings – which can be up to 14 metres in length – is partly automated by means of a pipe handler. This enables the installation and removal of thread strings, pipes and other drilling equipment to be controlled at the push of a button. Unlike classic drilling rigs, therefore, the thread string is no longer manually tightened and raised on a winch by drilling workers. 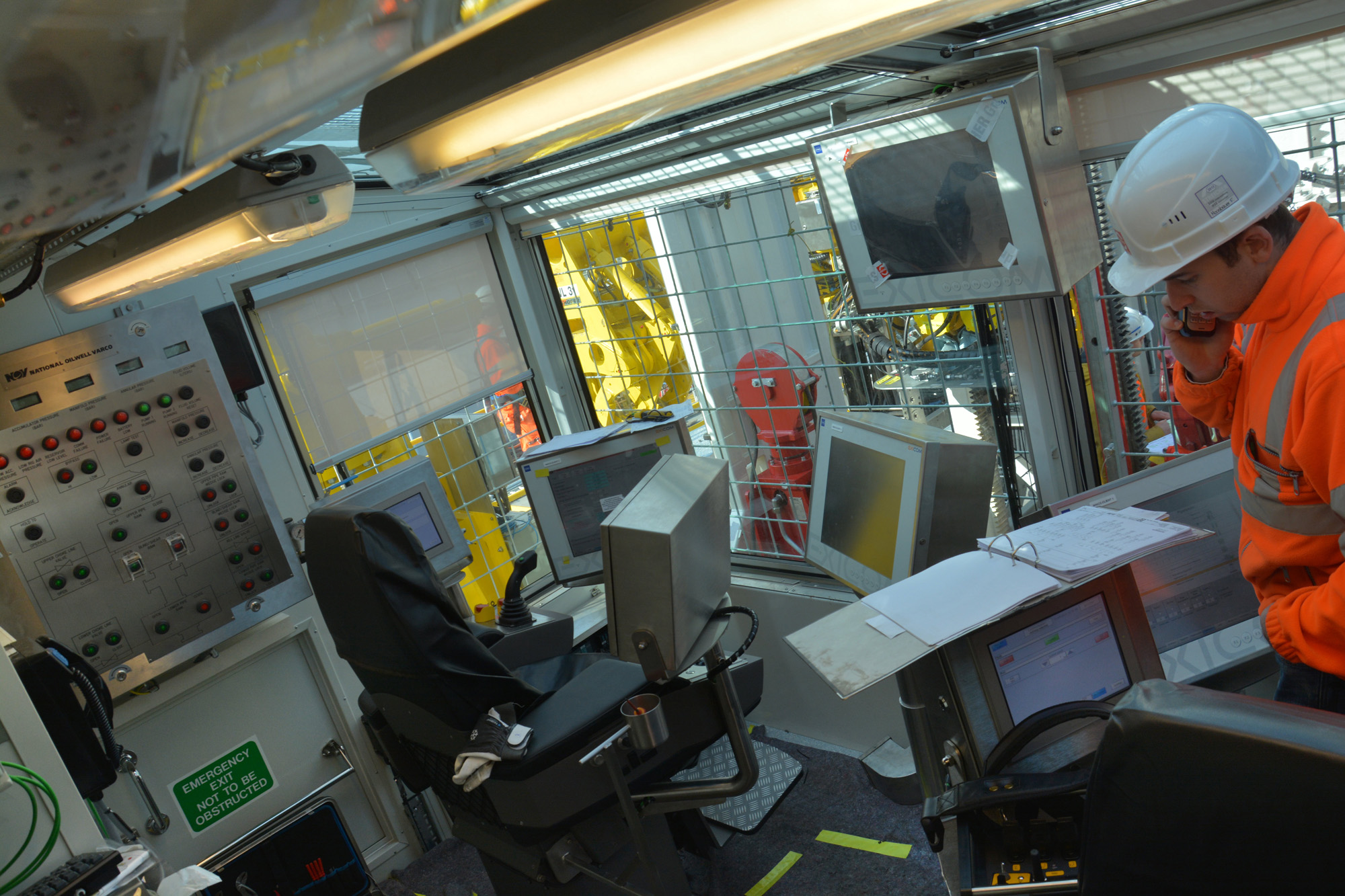 High tech on the high seas makes this possible.

"This idea of ensuring suitability for use on as many platforms as possible makes it essential to come up with a physical concept for the drilling rig, ensuring that the module set-up can be adjusted in as small an area as possible. The rig must also be able to accommodate all the necessary equipment," notes Erwin Nutz, who is re-sponsible for the project at the STREICHER Group. He adds: "You can picture it as follows: all modules are tightly stored and stacked in order to take up as little floor space as possible." The complete floor plan of the VDD 400.2 rig therefore comes to 14 metres by 12 metres, not including energy generation. The VDD 400.2 can be ad-justed along its lateral axis and its longitudinal axis in order for an entire grid of drill holes with varying drill depths to be run-in on the gas field.

The modular concept of the VDD 400.2 can be conveniently implemented using HAWKE connectors. The process of disconnection, removal and reassembly in anoth-er location is completed with ease in a few simple steps. Robert Paternoster, who is responsible for electrical equipment at the STREICHER Group, explains: "Of course, we could also clamp all the cables in place, but this would generate two separate issues. As well as increasing the number of potential sources for a fault, it also leads to increased offshore wage costs."

When removing the HAWKE connectors, you only need to ensure that the cover is screwed back on. A warning to this effect is therefore attached to all HAWKE con-nectors, and each cover is secured to the connector by means of a chain. All HAWKE connectors are also colour-coded, preventing any errors from slipping through the net in the course of attachment and removal. HAWKE connectors from the InstrumEx and ControlEx series are used in the STREICHER drilling rig for the purpose of connecting small and medium-sized cables.

The HAWKE connectors are ideally suited to use on the platform and in tough envi-ronments. The InstrumEx range is certified for Exde and the ControlEx Exd types of protection as well as being extremely robust, maintenance-free and suitable for ap-plication temperatures from -40°C to +60°C. The HAWKE connectors feature all nec-essary approvals for the Ex field in accordance with ATEX, IECEX and GOST-R. As an official HAWKE Connectors Stockist, Kernen-based Jacob GmbH stocks a wide as-sortment of HAWKE connectors for 4-wire to 60-wire lines that are ready for imme-diate dispatch.

Alongside the connectors, large quantities of HAWKE cable glands are used in termi-nal boxes and cable inlets on the platform. The cable glands from the market leader HAWKE – which are Exd & Exe certified are practically standard products in the Ex field. 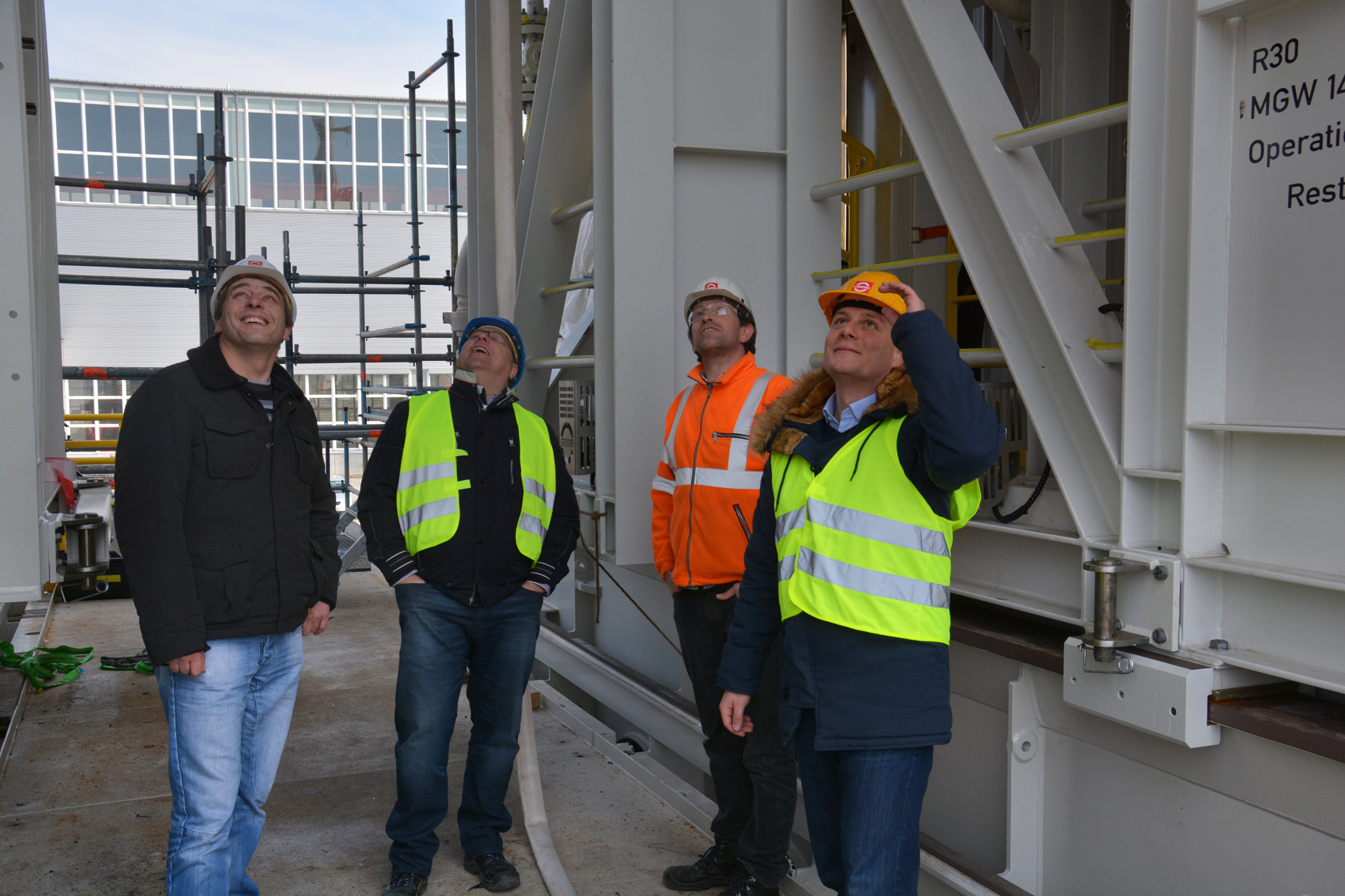 With a company history dating back more than 100 years, the STREICHER Group combines quality and specialist knowledge with many years of experience in the spe-cialist fields of pipe engineering, rig engineering, mechanical engineering, deep min-ing, civil engineering, raw materials and construction materials. As part of the parent company MAX STREICHER GmbH & Co. KG aA, based in Deggendorf, the company employs around 3,000 staff at home and abroad. Since January 2013, the precursor to the VDD 400.2 rig has been in use on the MAUI A gas platform off the coast of New Zealand.

The UK-based Company Hawke International (A member of the Hubbell Inc. group of companies) has been one of the world's leading providers of cable glands, enclosures and connectors for potentially explosive environments for over 50 years. Hawke ca-ble glands and connectors are predominantly used in the oil, gas and petrochemicals industry, as well as onshore and offshore applications.