The automation specialist LÜTZE, Weinstadt has expanded its proven Air-STREAM wiring system to include a modular carrier rail system that allows a previously unattainable level of flexibility and simplified frame assembly.

The new AirSTREAM carrier rail system is suitable for users that want to design a mounting frame independently, quickly and easily on site. To this end, the LÜTZE engineers have ex-panded the modular system to include defined lengths and standardized dimensions in a 10, 25 and 50-mm hole pattern. The AirSTREAM carrier rail system offers up to 12 mm more depth, which is highly beneficial for special cabinets. The carrier rails offer much more flexibility, also for the subsequent assembly of the equipment. This allows other modules to be installed be-tween the installed modules using rotating sliding nuts. Alternatively, entire fields in the middle of the frame can be left free for subsequent configuration. In addition to a snap-fit edge protector that closes the ends of the carrier cleanly, Lütze has produced new brackets that are specially designed for the carrier rail system. These brackets allow the space-saving installation of rails across the entire frame width. The new carrier rails are compatible to the long-time proven VPsym system, which means both systems can be used in parallel. 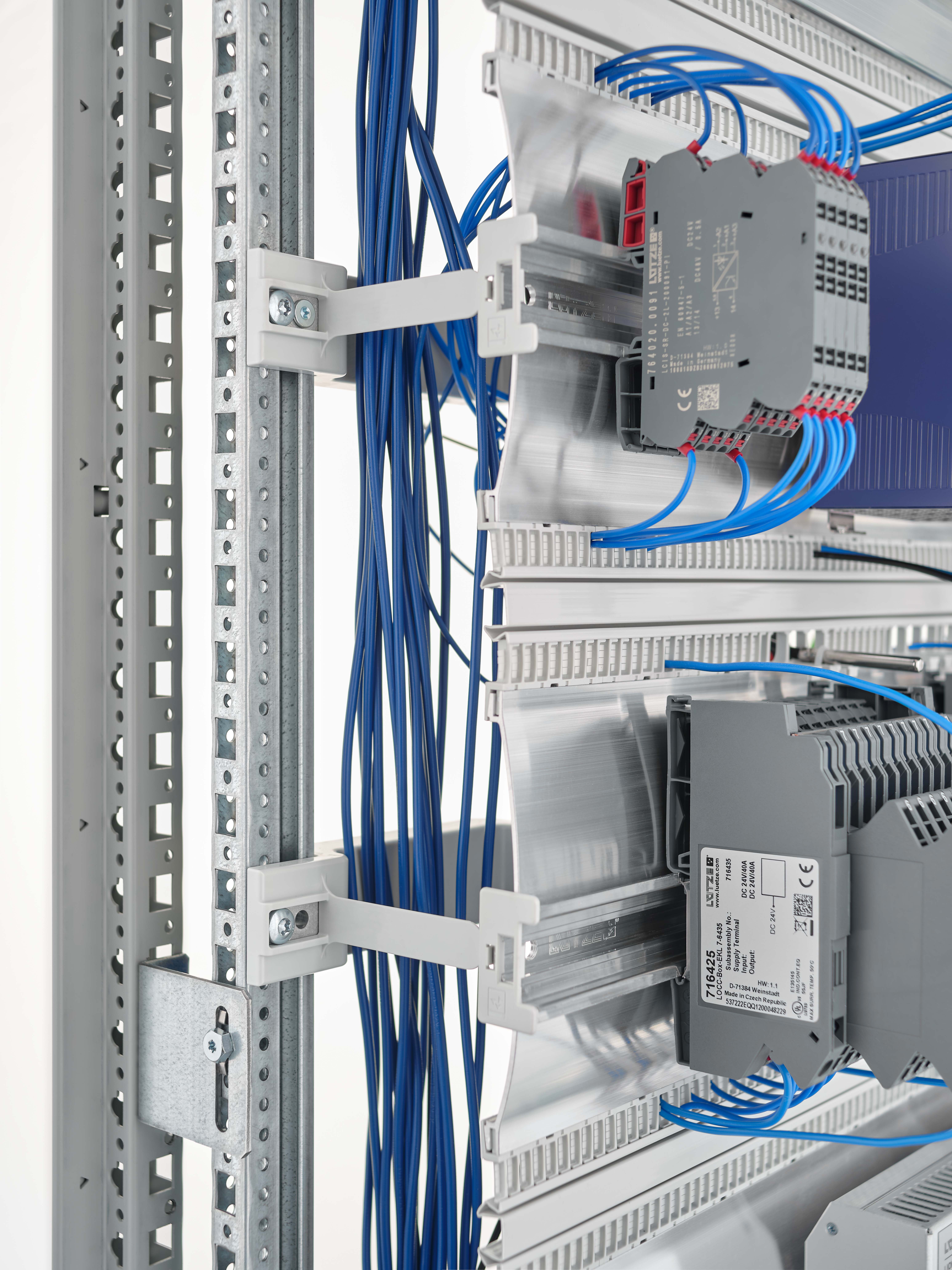 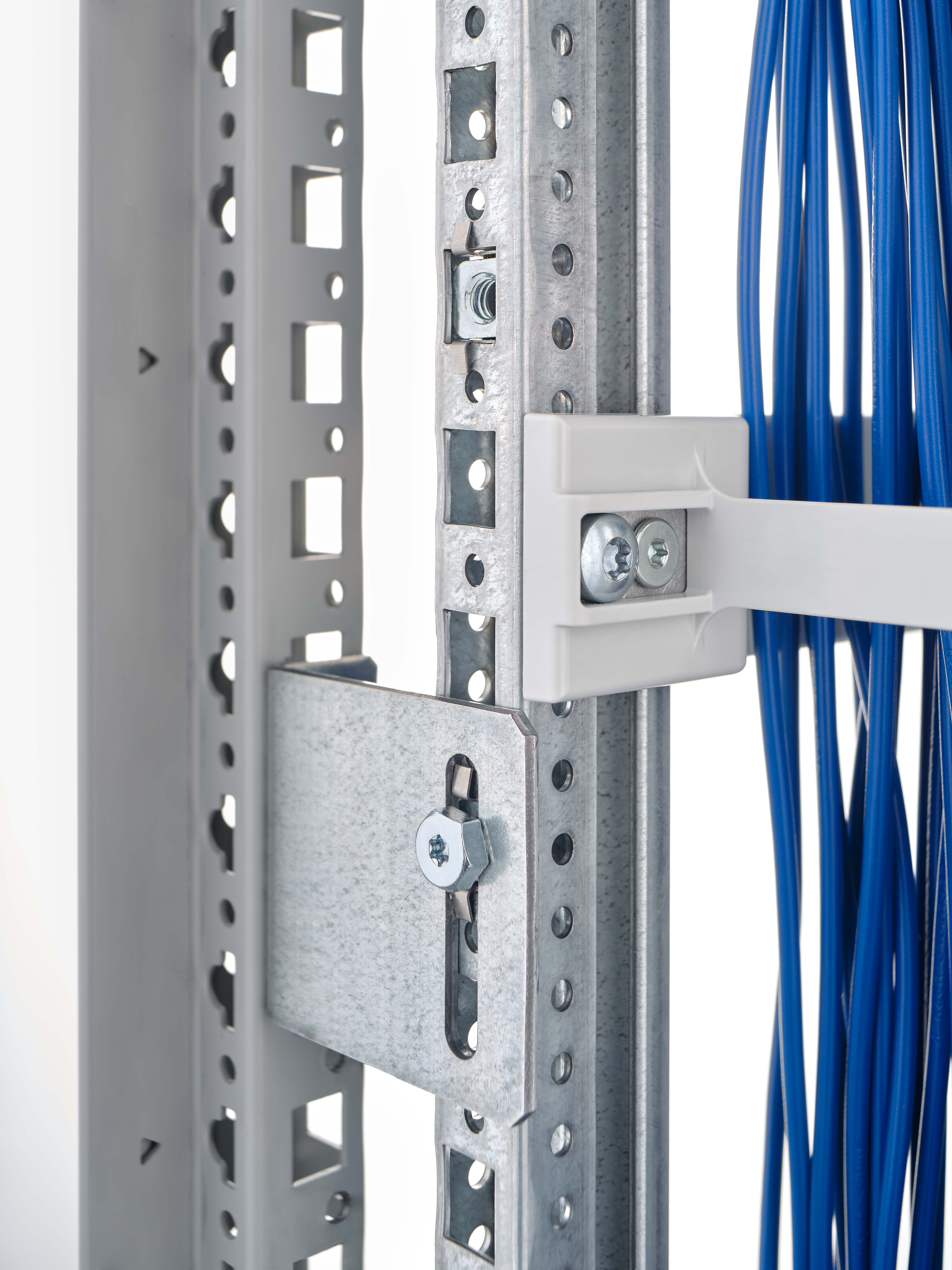 The central benefit of the new AirSTREAM carrier rail system is the significant time savings when assembling the frame. Practical tests confirm that the time required for final assembly can be cut by up to 50%. The assembly process is flexible and intuitive thanks to the defined hole pattern. Without measuring or drilling, modules can be positioned and screwed using brackets or even EMC profiles in a 10 mm grid or with slide nuts. Users do not require an assembly table nor special tools to build the frame. Assembly on the workshop floor is even possible.

To affix the frame in the cabinet, Lütze also supplies special adapter brackets and flexible screws that simplify the frame installation depending on the circumstances. To this end, a cage nut with a metric thread is swung into the required point of the carrier rail hole pattern. Alternatively, tapping screws can be used.

The AirSTREAM carrier rails are shaped in a profiling procedure, during which a high-quality steel plate is processed in numerous steps and shaped into its new structure. The carrier rail modules offer excellent current capacity and contact resistance properties and are continuously earthed. Compared to the classic mounting plate, an AirSTREAM frame built with the new carrier rails offers a weight saving of approximately 8 kg.

The AirSTREAM carrier rail system has completed all tests and certifications relevant for industrial use with regard to loads, including vibration-shock, corrosion and harmful gas.

The ductfree AirSTREAM wiring system enables the climate in the control cabinet to be improved so that the active cooling output can be minimized. In contrast to conventional control cabinet designs with mounting plates, the design is separated from the wiring level in the AirSTREAM and cable ducts that impair the flows are avoided. Also, a chimney effect is created behind the wiring frame and ideally, the cold air is guided downwards to the rear and then to the front and upwards again. Therefore, a cool zone is created on the rear side of the cabling. Permanent air circulation is generated between the warmer wiring front side and the cooler wiring rear side.

The flexible design and lack of cable ducts in combination with the AirSTREAM system generates more space in the control cabinet and helps to save time when wiring, mounting and dismantling.